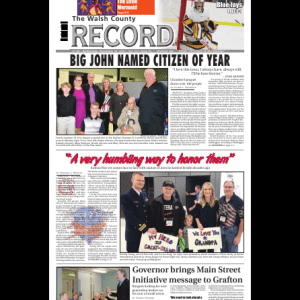 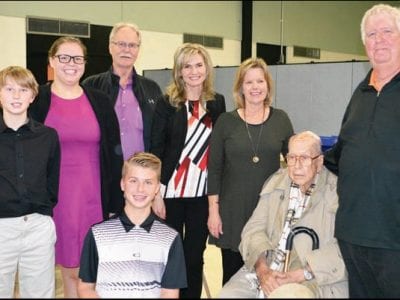 GRAFTON – Residents of the Grafton community honored one of their own on Monday at the 59th annual Grafton Area Chamber of Commerce awards banquet held at St. John’s Parish Center. The first award of the night was presented by Denny Schneider for Citizen of the Year. Schneider introduced the winner by saying he has been a substitute teacher, truck […]

“A very humbling way to honor them”

GRAFTON – The month of November was a powerful one for Korean War veteran Donald Young of Grafton. On Nov. 5 he began a two-day adventure filled with humbling experiences as part of the WDAY Honor Flight to Washington, D.C and days later celebrated the 20-year anniversary of surviving a massive heart attack. Roughly 300 people filled Hector International Airport to pay homage to the 95 honor flight veterans […] 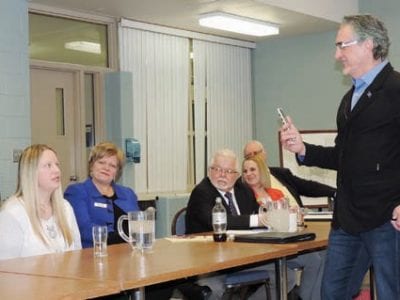 GRAFTON – The North Dakota Governor’s signature Main Street Initiative train made a stop in Grafton on Monday. Burgum and an entourage of economic development and human services staff from Bismarck came to tour, listen, and convey their vision for the initiative on Monday. Burgum outlined his vision for North Dakota’s competitiveness in the 21st century global economy. His vision […] 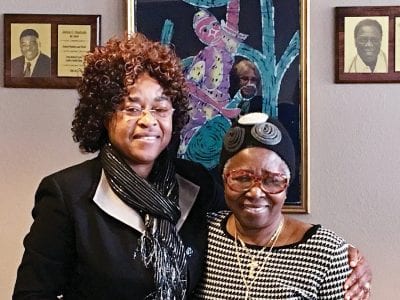 Combined for 50 years of service


North Dakota Highway Patrol (NDHP) in cooperation with sheriffs’ departments from Walsh, Pembina, Grand Forks, Nelson, Ramsey, Benson, Trail and Pierce counties will be conducting a traffic and alcohol saturation today Wednesday, Nov. 22. The saturation will take place from 4 p.m. until 12 a.m. and be located along Interstate 29 and U.S. Highway 2. Twenty officers will take part […]


SEPTEMBER 2017 DISPOSITIONS Victor Moreno IV, Hoople, burglary. Defendant shall pay $25 in fees. Defendant shall serve three years supervised probation and five years in Department of Corrections and Rehabilitation with first serve four years with credit given for 220 days served. All sentences of this date shall run concurrently to each other and 10-2017-CR-42 and 50-2017-CR-236. Defendant shall have […]


Drayton’s 30th annual Old Fashioned Christmas event runs the full week of Dec. 4-9, with daily store specials and drawings, food, Wednesday’s Tree of Lights program, Saturday’s pictures with Santa, sleigh rides and Christmas at the Movies, downtown. Watch for more details in upcoming editions of The Walsh County Record as well as on the city’s web page at www.DraytonND.com […]

Bake sale at Our Saviour’s


A Christmas bake sale will be held Saturday, Dec. 2, at Our Saviour’s Lutheran Church in Grafton, from 9 to 11 a.m. Caramel rolls and coffee will be served in the church basement during the hours of the bake sale. Tickets will also be available for a quilt raffle and door prizes will be awarded. The church is located at […]